Helping customers feel supported, even after the sale. 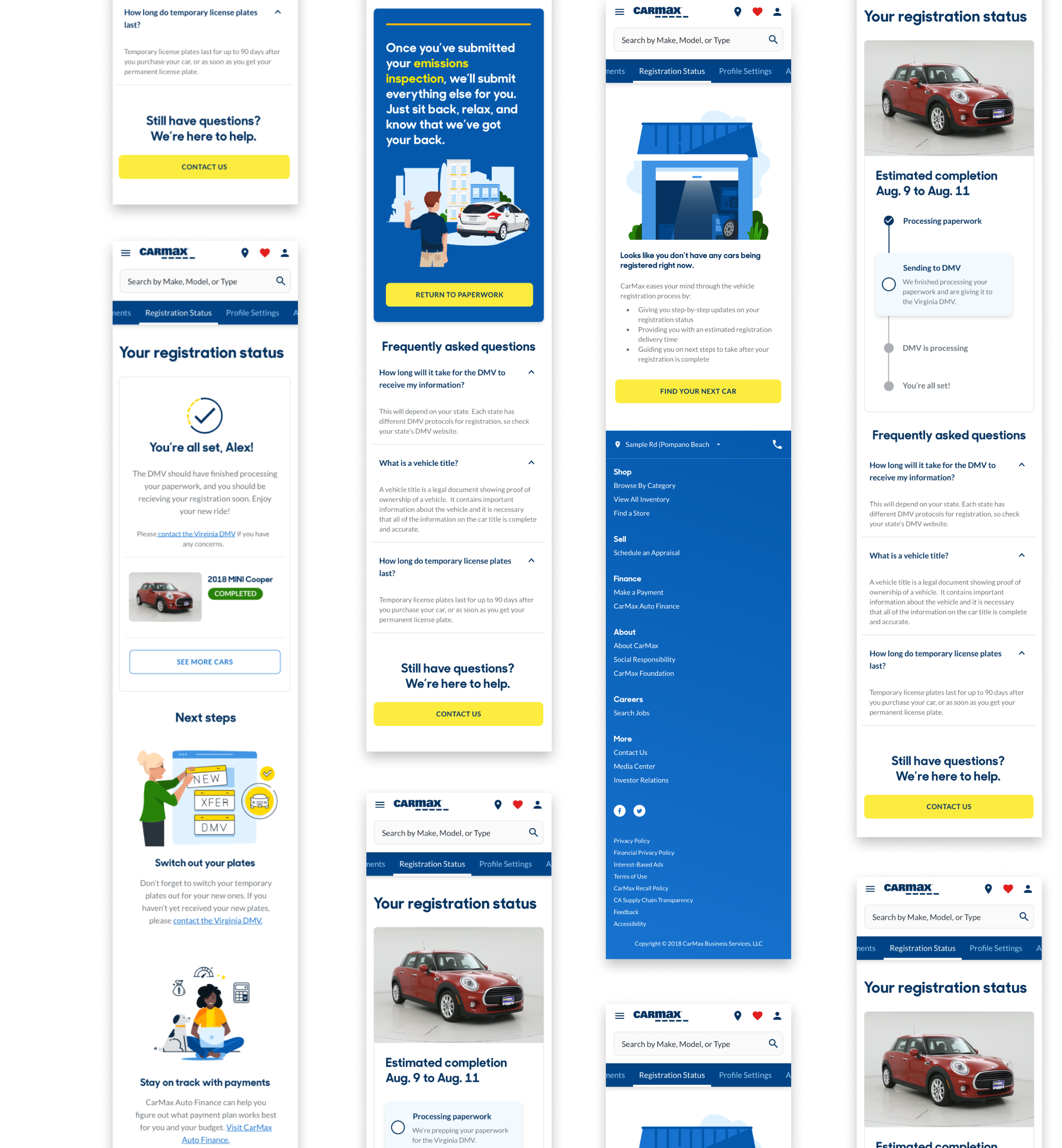 I worked as the sole designer on CarMax’s Product Intern Team in summer 2021. I worked alongside a Product Manager Intern, a Business Analyst Intern, and three Software Engineering Interns to research opportunities the in post-purchase realm, and I designed and tested a solution to our selected opportunity area of informing customers of their vehicle registration status, owning the product from beginning to end.

How might we keep customers up-to-date on where their registration paperwork stands in the process? 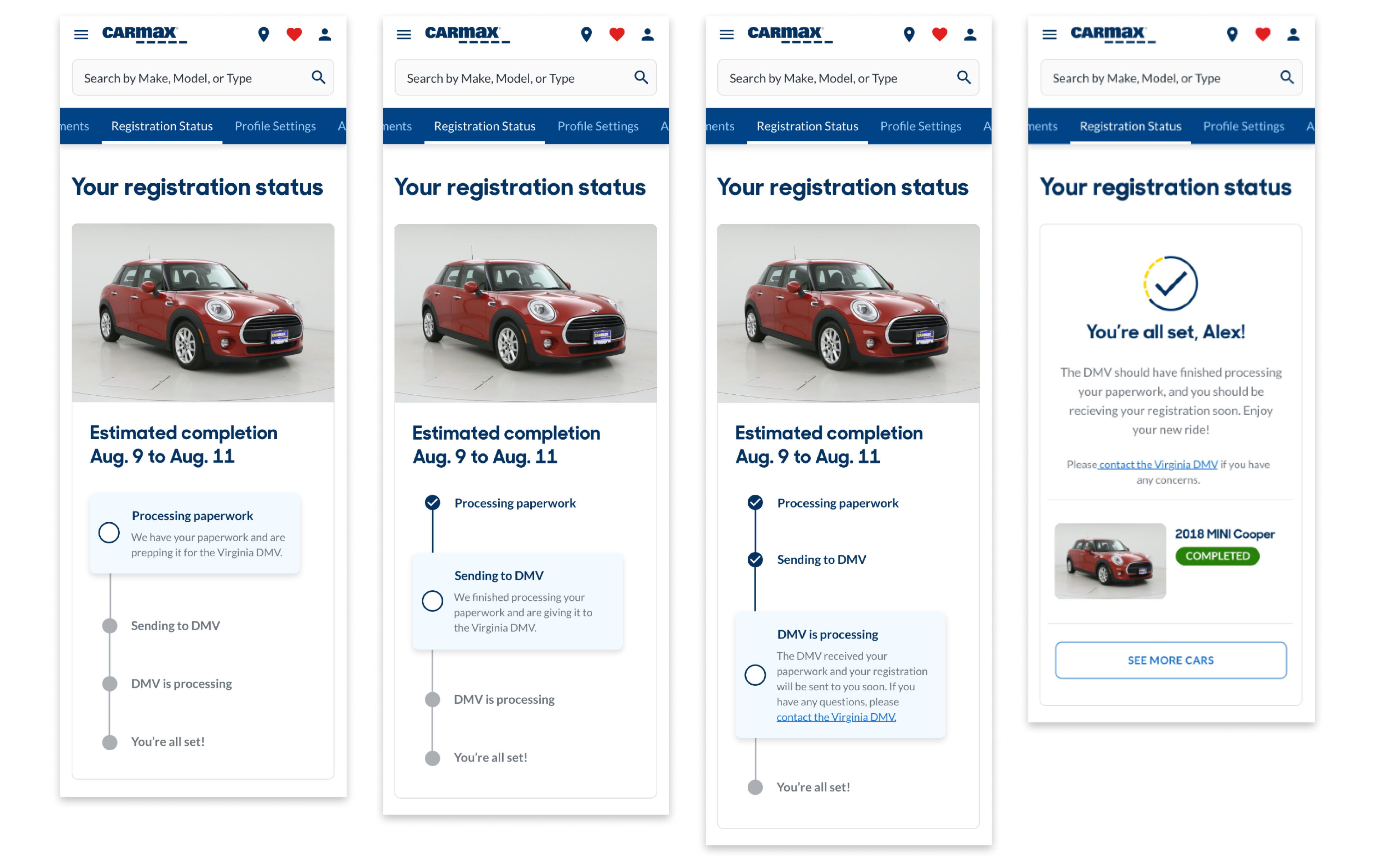 Customers can track the registration status of their newly-purchased vehicle, from the moment that CarMax processes their paperwork all the way to when they get their registration information in their mailbox, keeping them up-to-date and constantly in the know. 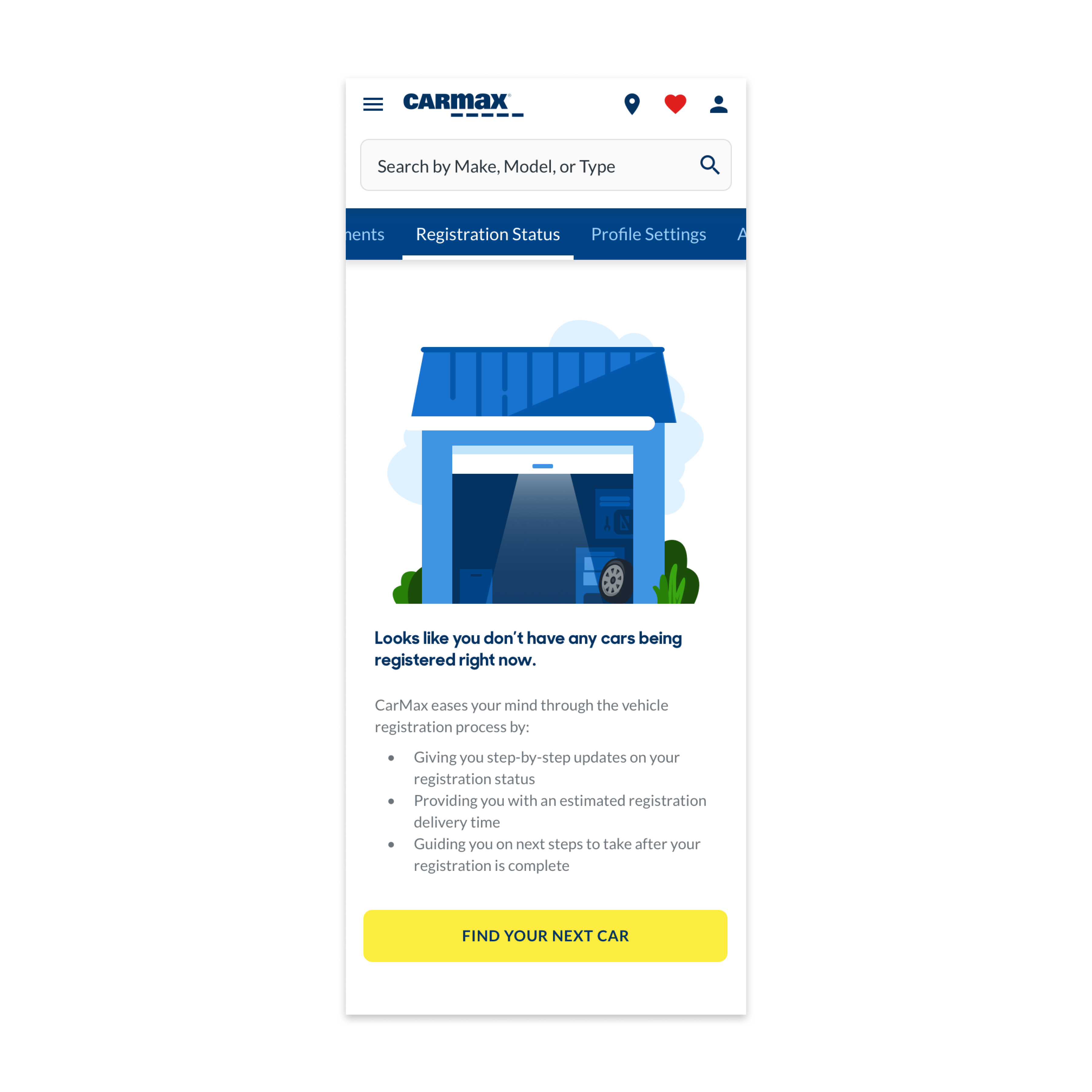 Get clear expectations before the registration process even begins. 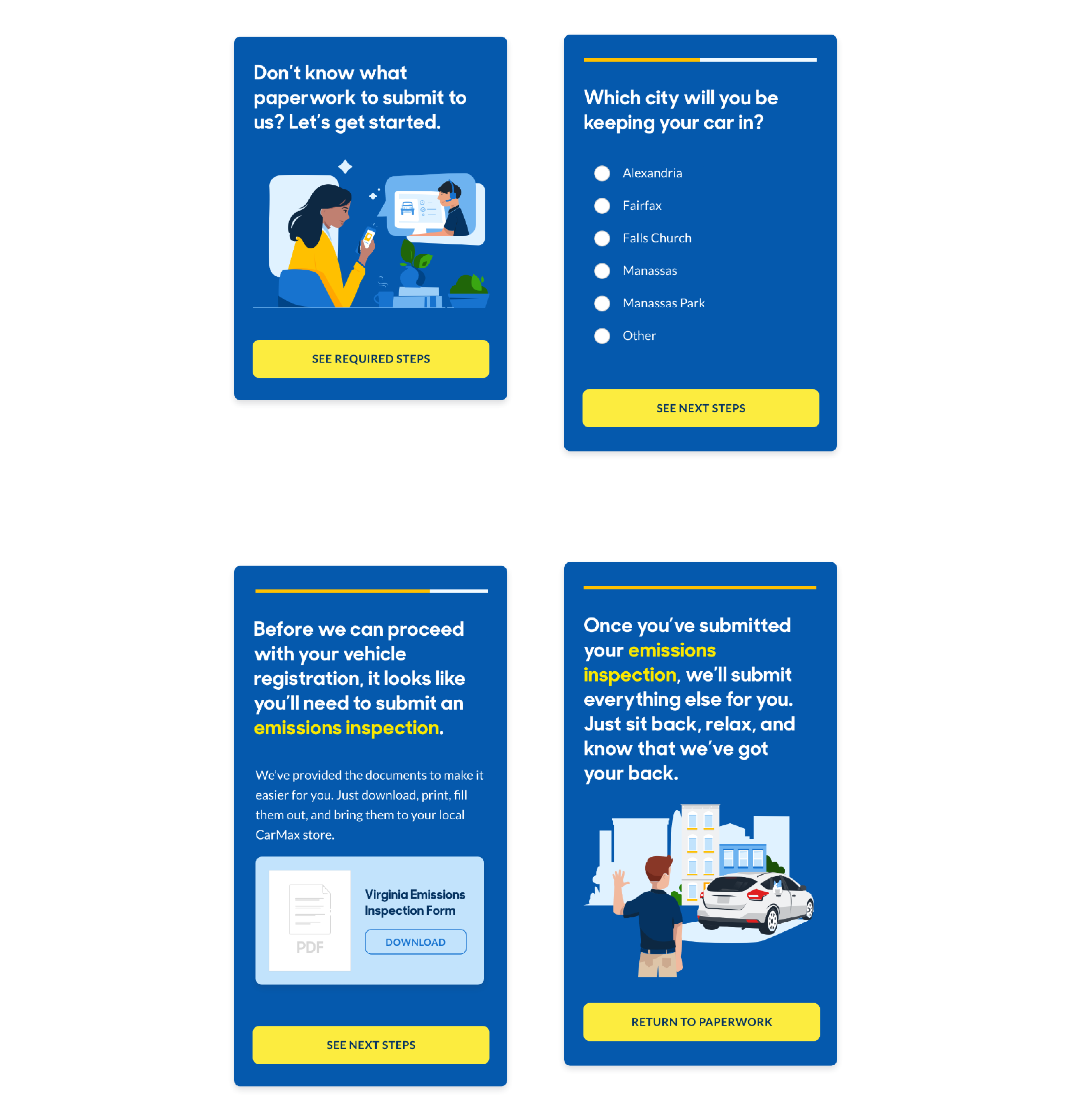 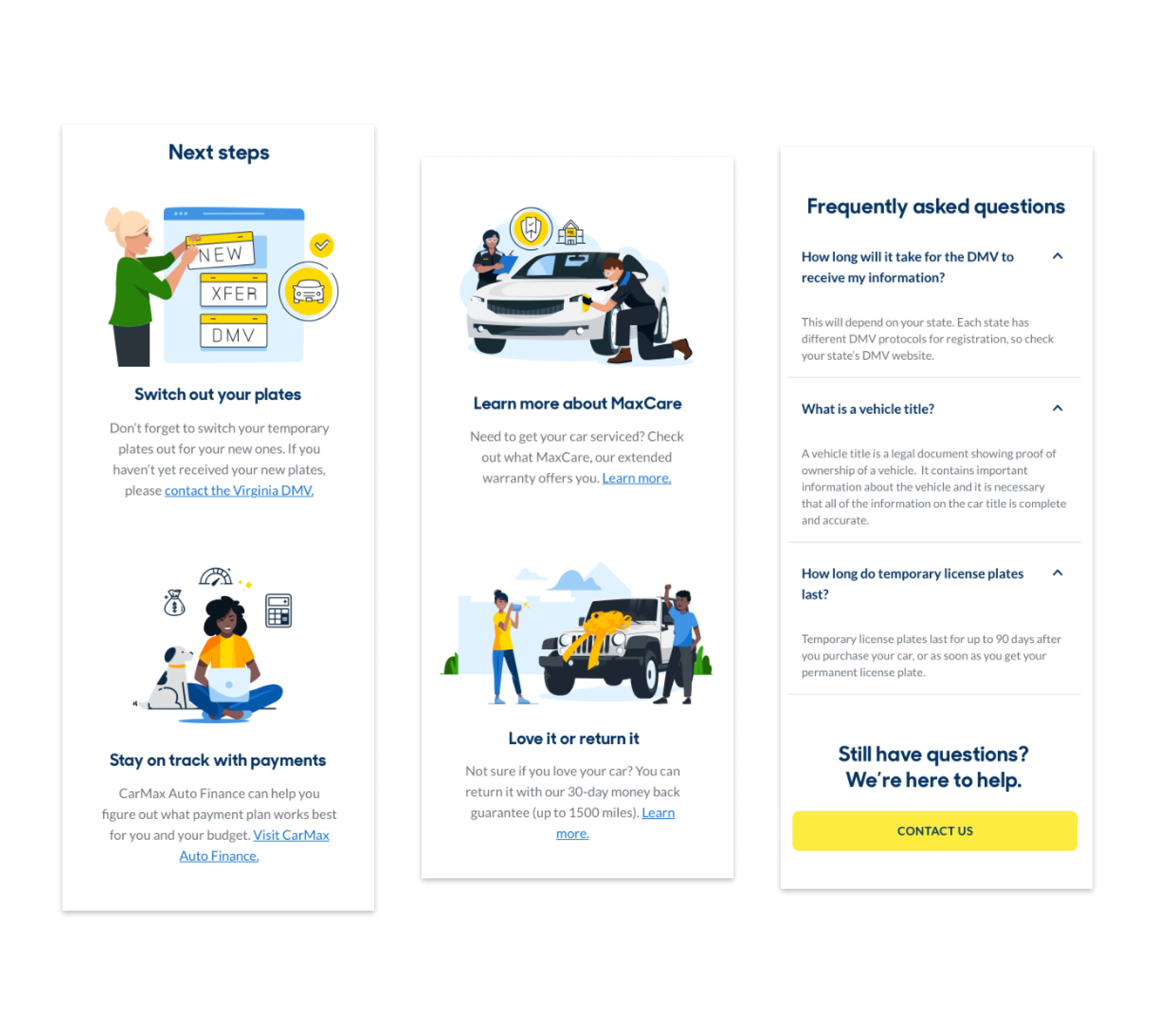 Support customers who have more questions.

Going through the vehicle registration process can be confusing. Customers no longer have to endure long wait times from the CarMax call center to ask about their registration status with the addition of a frequently asked questions section and a method for customers to directly contact CarMax if they have any questions not addressed by the FAQs.

Digging deeper into the problem

Since we were given such a huge problem space, my teammates and I had to conduct extensive research to discover what customers’ biggest concerns within their first 30 days of car ownership are.

01. Text Messages
My teammates and I analyzed text messages that customers sent to CarMax to find that the most pressing issues were pertaining to the status of tags, titles, registration, and license plates.
02. Customer Insight Data
I reviewed qualitative data from surveys that customers filled out 90 days after their vehicle purchase, while the Business Analyst Intern reviewed its quantitative data. Based on these data, customers most often expressed that they needed CarMax to follow up with them after the sale about service, paperwork, and general communication.
03. Customer Interviews
I conducted 10 customer interviews using Ethnio, speaking with them virtually over Microsoft Teams as my teammates listened in. I found that customers felt as if CarMax wasn’t communicating with them enough about post-purchase processes such as service and paperwork.
Key Insights

To synthesize the team’s findings, I worked with the Product Manager Intern to devise an opportunity solution tree, primarily assessing the importance of potential opportunity spaces. As a team, we all decided that the opportunity space we wanted to prioritize based on user research, technical feasibility, and business needs was,
‍
“How might we keep customers up-to-date on where their registration paperwork stands in the process?”

After ideating solutions for this problem, our hypothesis was born:

‍We believe that if we give customers a way to digitally track the status of their vehicle registration after purchasing, they will feel better valued and less confused, which will ultimately reduce complaint volume, increase sentiment, and increase purchaser NPS.

Our team’s creativity soon began to spark. I planned and facilitated a design studio with the entire team, helping everyone find their inner designer. Through this design studio, I was able to guide the team to converge on a single decision as a group after creating several divergent solutions individually. After agreeing on designs, I sketched out a low-fidelity prototype of the interface and handed it over to the software engineers as I prepared to complete the first rounds of testing.

Initial prototyping, from the design studio to low-fidelity sketches.

Before moving on to designing a wireframe to test on CarMax users, I had to make a few changes to the design. After seeing the low-fidelity prototype, the engineers mentioned that it wouldn’t be technically feasible to have the to-do list pop out on the side, and my design mentors told me that we needed to be designing mobile-first, as CarMax receives most of its users on the mobile site. As a result, for the next iteration, I changed the to-do list to a drop-down and began to focus on mobile. 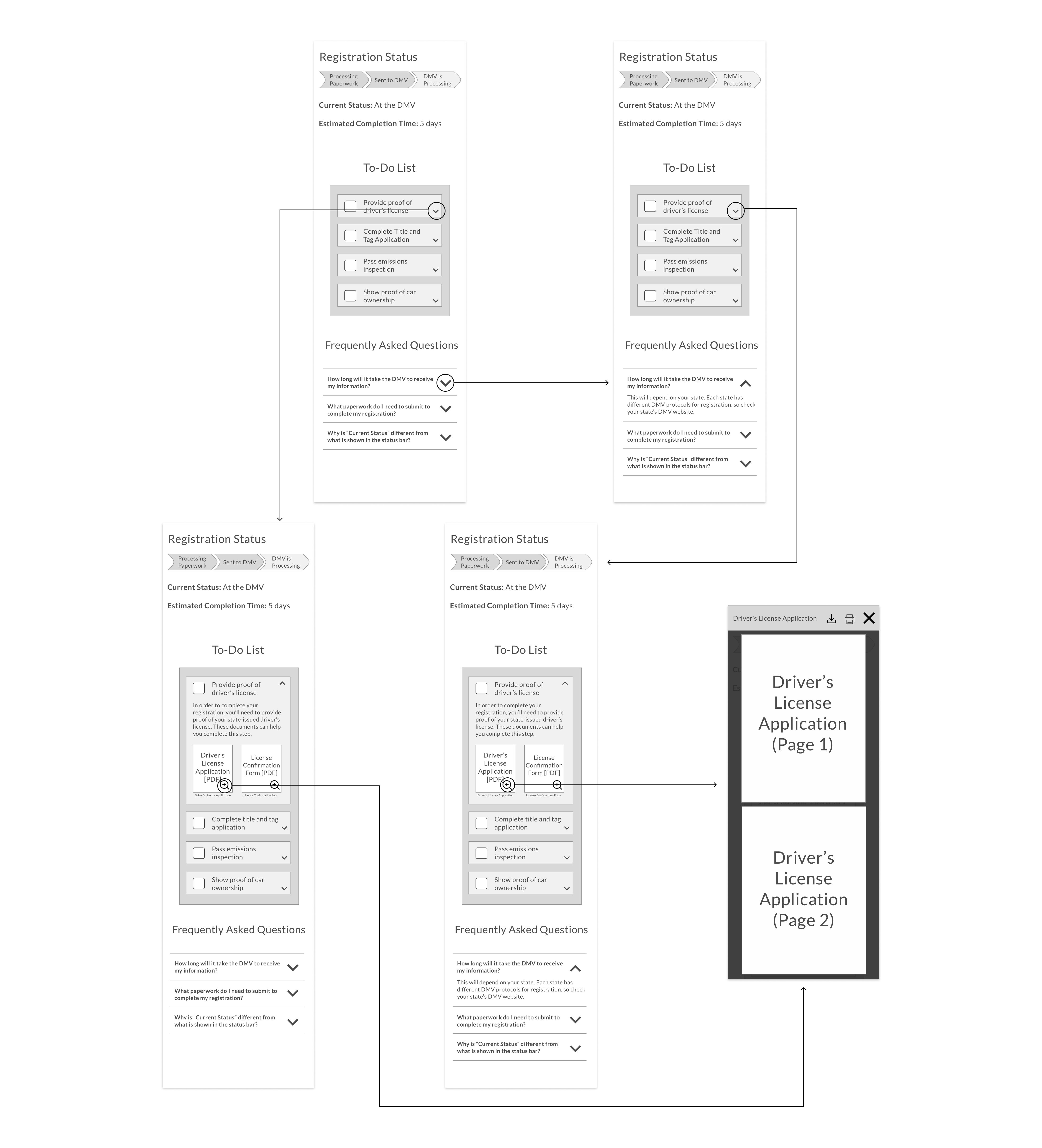 After testing this initial wireframe, I found that while customers appreciated having a centralized place to get information on their registration, the purpose of the interface was unclear. After having a design jam and discussing with the rest of the intern product team, we decided that for the MVP that we wanted to release by the end of this summer, it would be more feasible to put a hold on the to-do list and work on developing that further afterwards. Once I changed the prototype to reflect that and used a combination of text and visual cues to focus in on the registration status tracker, customers were much more easily able to tell what the purpose of the interface was. 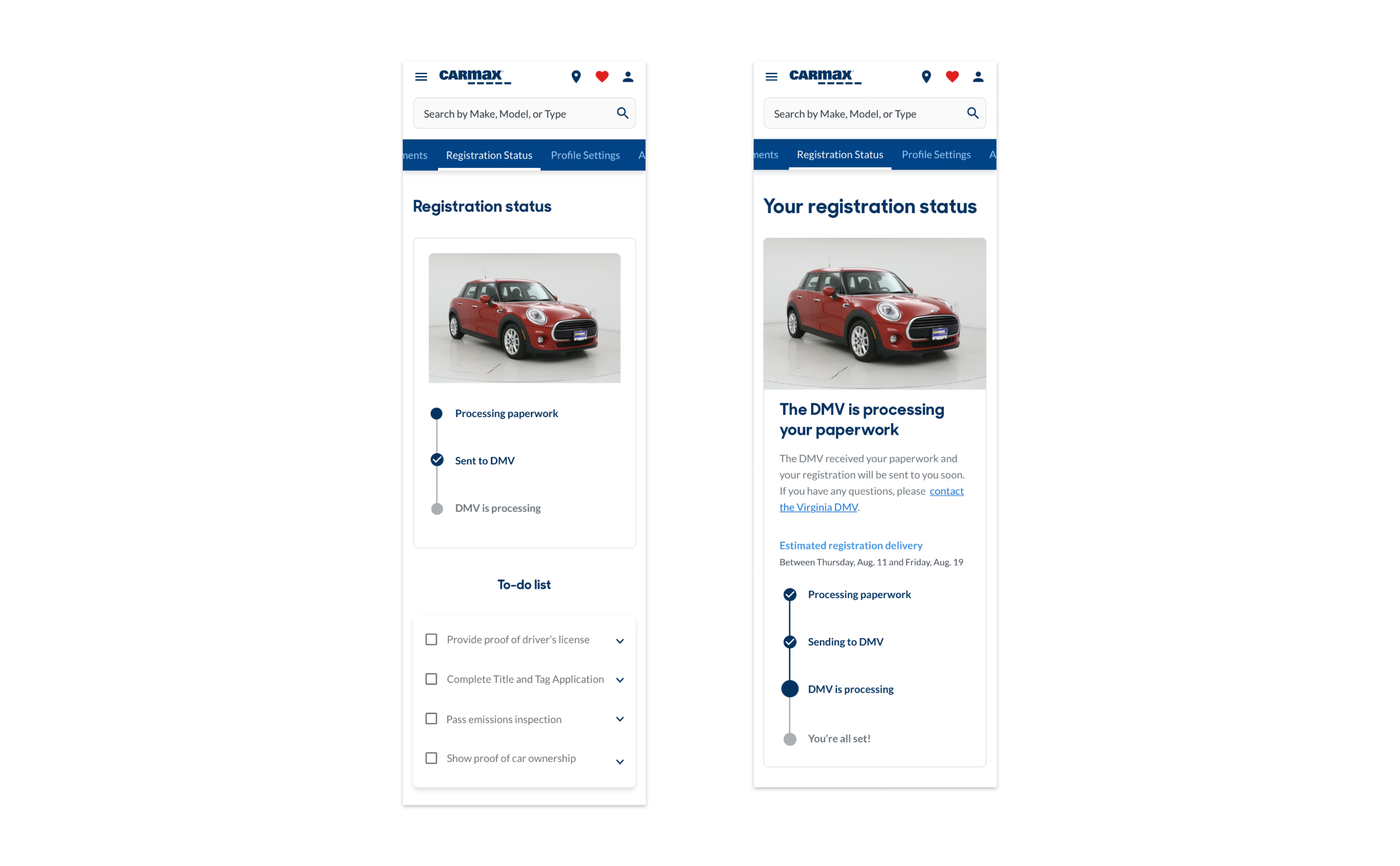 After some more testing, the feedback I received indicated that while the interface was simple and easy to understand, it felt plain and uninviting. Additionally, customers brought up that with the current prototype, after their vehicle registration was complete, they felt that CarMax was done with them and dropping them off a cliff, an issue that we meant for this product to address based on the research our team did in the discovery process. In my next iterations, I addressed these concerns by creating a colorful, friendly section to explain next steps.

Iteration to address issue of customers feeling that CarMax was dropping them off of a cliff after the sale. 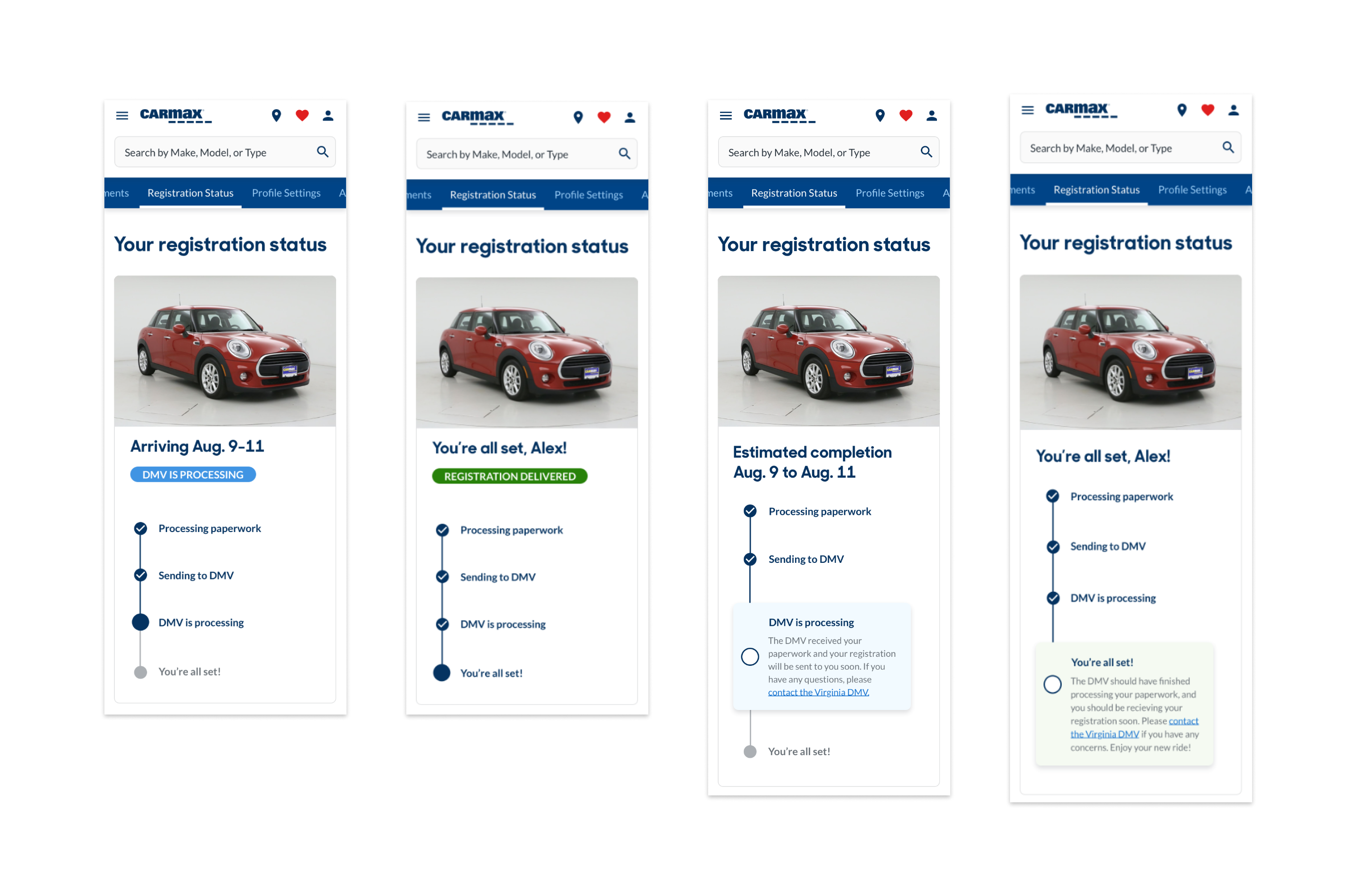 Throughout testing, customers expressed that they wanted to be guided through the paperwork process, showing that there was a need for something like the previously scrapped to-do list. As the engineers were working on developing the first iteration of the interface, I returned to the to-do list, asked my design mentors for help, and simplified it into a step-by-step guided flow meant to walk customers through the process of submitting paperwork that CarMax may need from them. 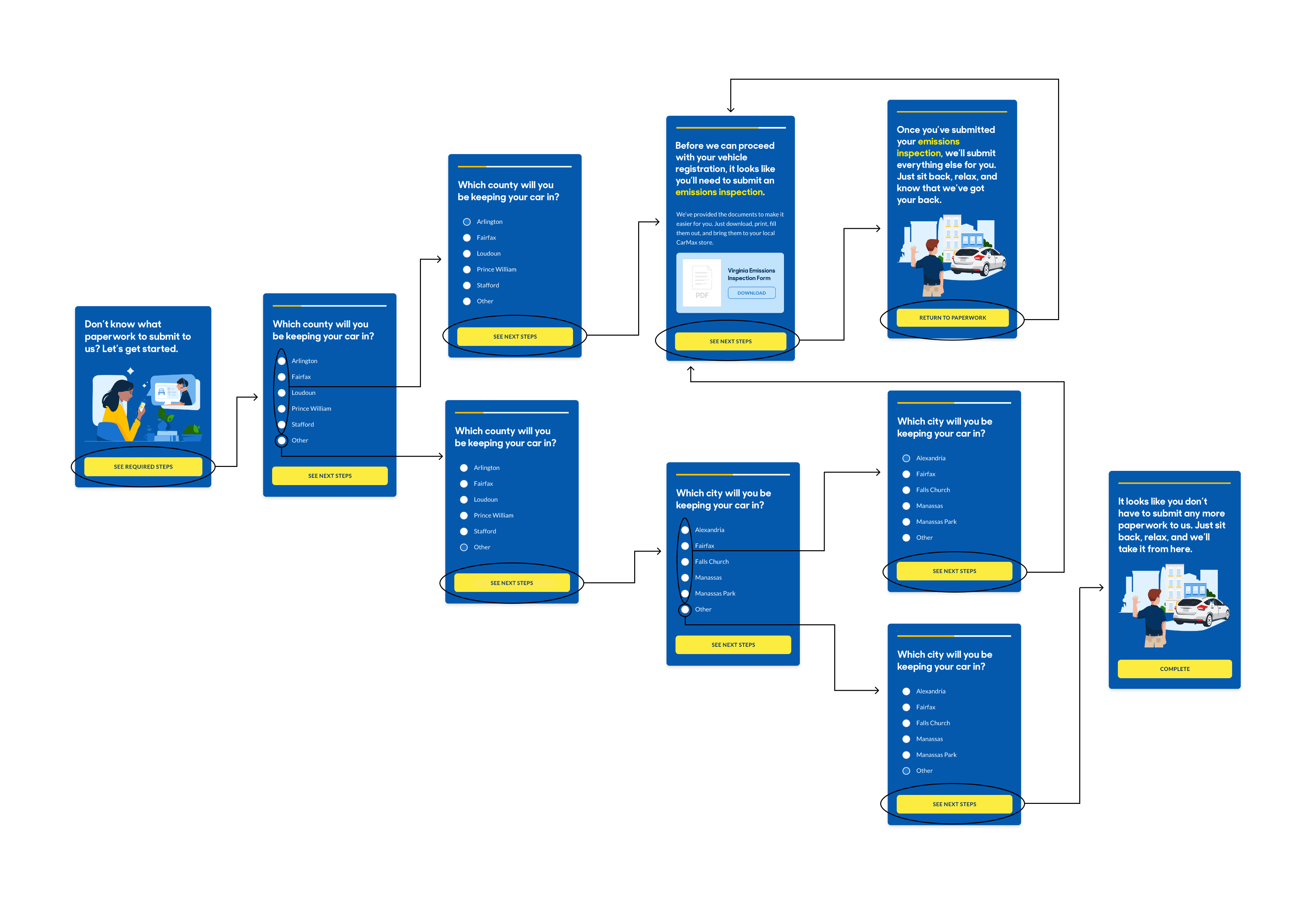 Results and coming to a close

While my team was unable to see the real-time results of our product before our internships came to an end, we were able to run a 404 test, testing to see how many website-visiting customers visit our empty "Registration Status Tracking" page on the MyCarMax site. When users clicked on the page, they were automatically redirected to a survey asking them about their expectations for the page. We were able to hit 94.3% of our goal traffic, and 93% of survey respondents said it was important or very important to be able to track the status of their registration and a majority of purchasers had expectations of the page that aligned with our design. Next steps for this product are to launch the first iteration, run an A/B test in Virginia stores, and iterate and retest. 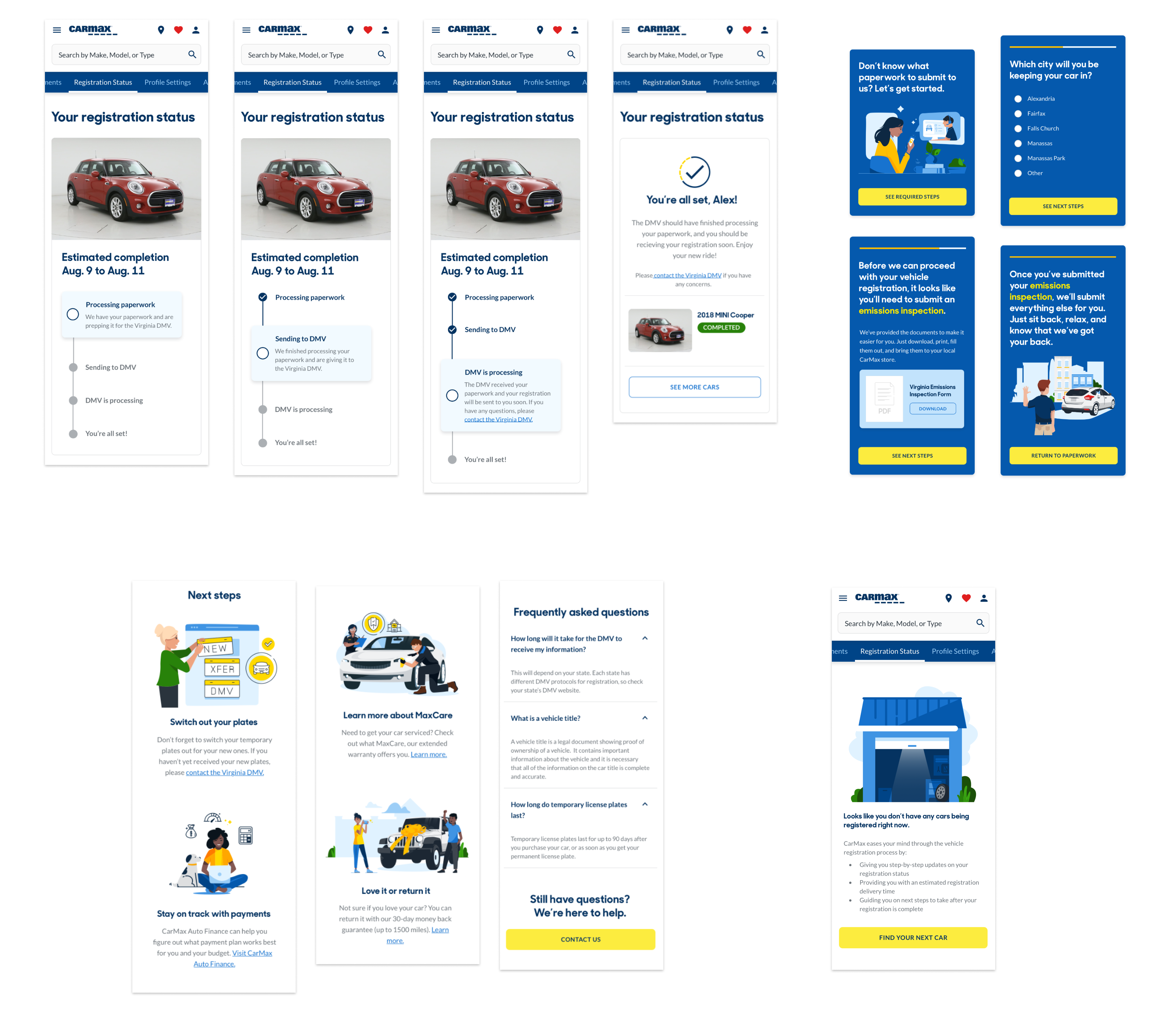 While I learned more than I could have ever imagined during my internship, some of the biggest things I learned are that if you have an idea, just go for it rather than spending so much time contemplating over it; the design process isn’t as straightforward as I thought; so many different parts of the company are involved with the design and development of a new product; and most importantly, getting to know your teammates as people reduces the risk of unresolvable conflict, and gives you some great new friends. 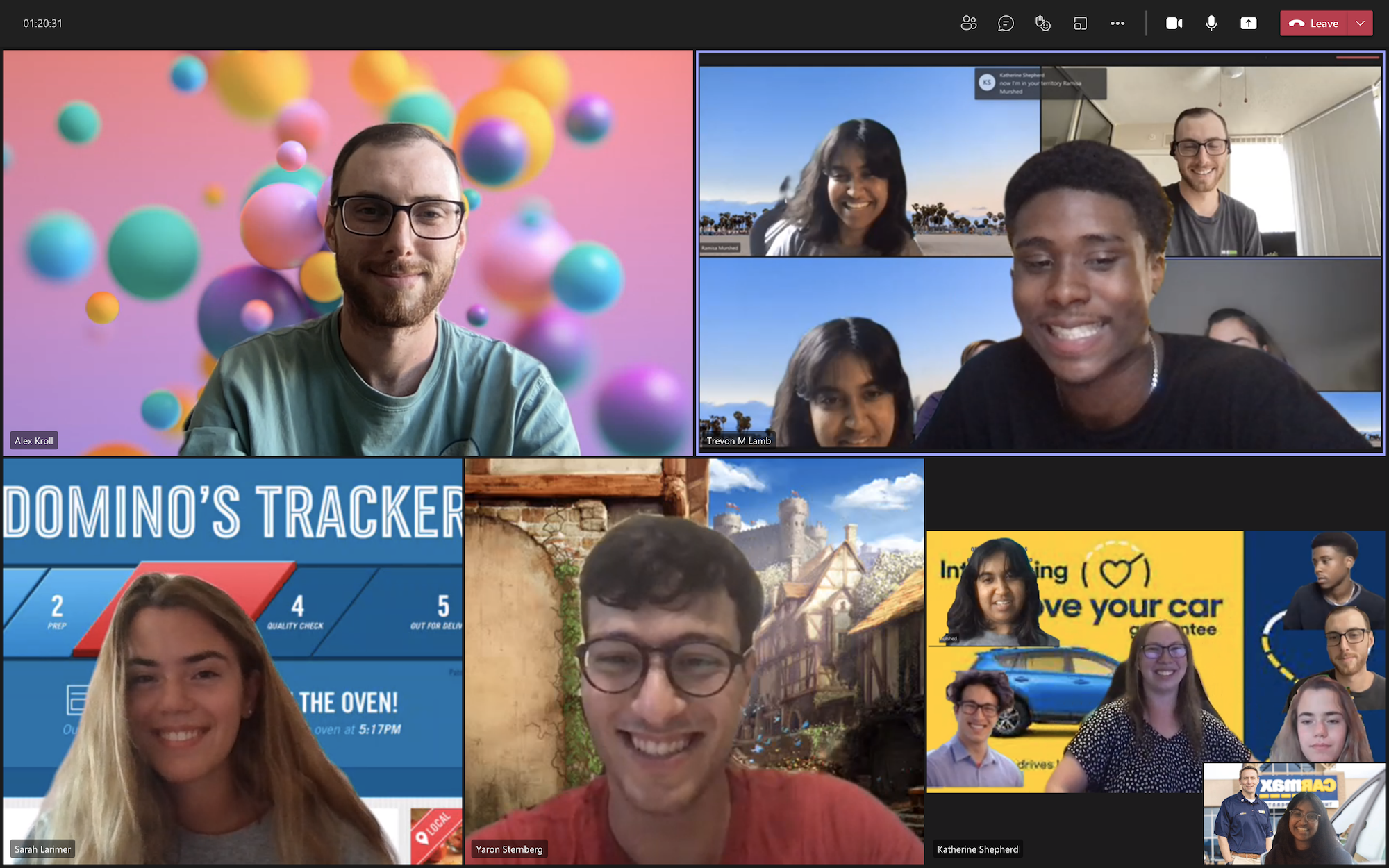 The awesome 2021 CarMax Product Intern team!
Back to homepage